Members of the Heart of the City Collective delivered an unexpected public service announcement during Google's presentation 3 Steps to Build Corporate Mindfulness the Google Way at the Wisdom 2.0 Conference. This segment of the conference was deleted from Wisdom 2.0's livestream archive. Luckily we were there with camera in hand.

As three Google speakers introduced the session, four protesters jumped on stage, unfurled an "Eviction Free San Francisco" banner, and proceeded to chant, "Wisdom Means Stop Displacement; Wisdom Means Stop Surveillance; San Francisco: Not For Sale!" After two minutes on stage, security guards and conference managers ushered them away after a literal game of tug of war for the banner, which the activists won. Google and conference leaders proceeded to talk about "wisdom and mindfulness" but failed to address the grievances of Bay Area communities or the company's own hypocrisy in purporting to be "mindful."

The eviction epidemic in San Francisco is directly related to policies privileging Google and tech over longtime residents, businesses and organizations. Landlords and speculators are taking advantage of new tech money, displacing longtime and marginal tenants through both legal and illegal means, and then rerenting or selling condoized units to tech workers and other upwardly mobile people. Tech companies are also directly affecting our public infrastructure. In a pilot program conducted with research influenced by the tech and real estate industry, it was decided that the companies' private shuttle buses will now only have to pay $1 per use of public bus stops. Though, they were never charged with using them illegally over the last several years.

Google should not be speaking as experts on mindfulness, when they're playing a role in displacement, privatization of public assets, for-profit surveillance, profiling, policing, and targeting of activist communities. They and other tech companies have obviously become quite skilled at appropriating the language of counterculture and Buddhism and have historically marketed themselves as being benign and even democratic. However, many of them contribute to ALEC, the conservative, neoliberal, anti-environment, anti-immigrant, pro-privatization political action committee. We see through their masks and the ways they’re creeping into our physical lives and political systems.

If Google and other tech companies really care about mindfulness, non-violence, and wisdom, they should not simply shut their eyes to grievances of Bay Area communities. They should actively and compassionately listen to and address the voices of thousands of people being impacted by them, locally and beyond. Tech giants, awaken to this: San Francisco is NOT FOR SALE! 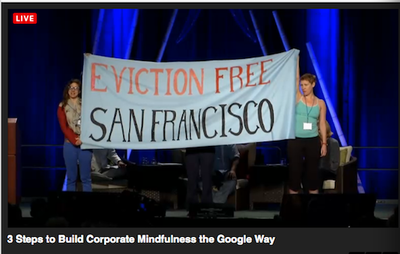