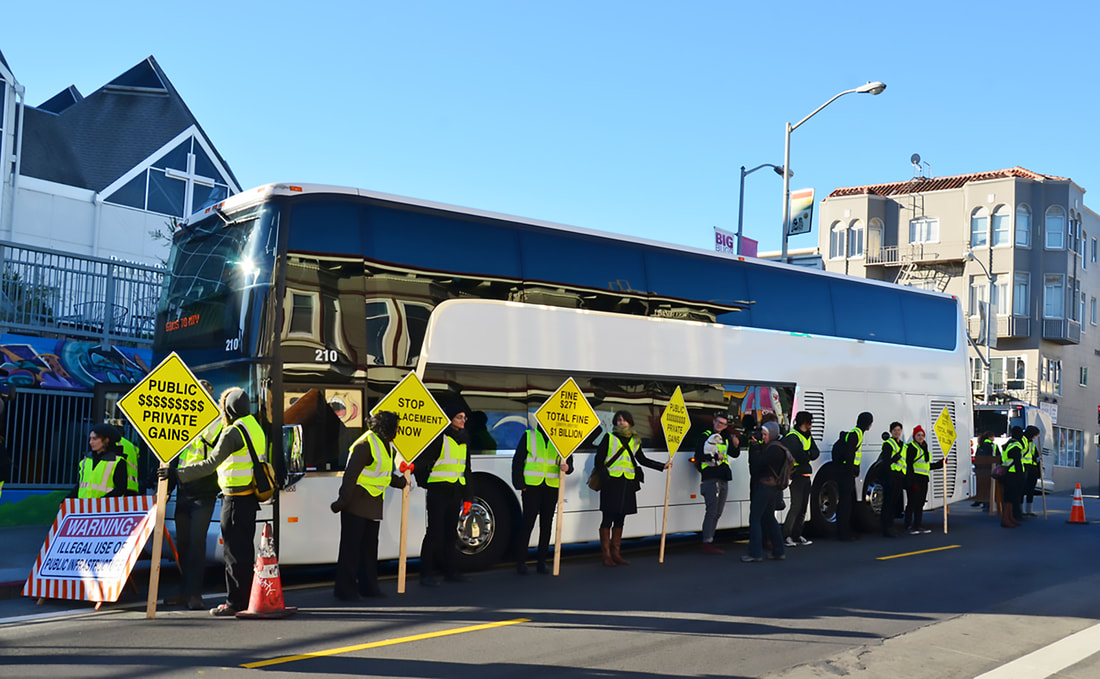 Initial "Google Bus" Blockade, by Heart of the City Affinity Group, in collaboration with tenants and housing justice advocates. December 9, 2013 in the Mission District of SF - 24th St. at Valencia St. Photo by Michelle Ott.
Google Bus Blockades for a Right to the City
by Leslie Dreyer

On December 9, 2013, the creative direct action collective Heart of the City organized with tenants and housing rights advocates to blockade a double-decker Google bus on 24th and Valencia Street in the Mission District of San Francisco. These oversized private shuttles, used by many tech companies but all generally referred to as “Google buses”, drew ire from residents across SF. Blustering along narrow neighborhood streets, they were the most striking visible symbol that the tech industry was impacting our city, amid a new wave of displacement and a massive increase in evictions. The tactic of stopping the white, unmarked, double-decker behemoths in their tracks spread, becoming a megaphone for a populace facing the loss of their homes, communities, safety net, and culture.

Earlier that year, the collective had organized our first action at the 2013 SF Pride Parade. Positioned amidst the various corporate tech contingents, we drove a fake Google bus lined with banners reading “Gentrification Eviction Technologies OUT”, trailed by a blown-up version of Brian Whitty’s Ellis Act Eviction map. It was six months later when we decided to escalate our tactics. On that cold December morning, we surrounded the bus on 24th Street dressed in fluorescent vests with street signs reading: “Warning: Two-Tier System” and “Stop Displacement Now.” Posing as the imaginary San Francisco Displacement and Neighborhood Impact Agency, we issued a fake ordinance using actual regulations that the San Francisco Municipal Transit Authority (SFMTA) should have been enforcing for years. The Curb Priority Law states that no vehicle other than Muni buses can park in Muni zones unless they have a permit; if they do so, they’ll receive a $271 fine. The faux ordinance took this infringement and applied it to SFMTA’s estimates of how many times private shuttles stop per work day - approximately 7100 times in over 200 Muni stops - which would have equaled roughly $1 billion in fines in the two years the program had amplified before the action. The Heart of the City collective demanded that the tech industry be forced to pay for its impact, and stated that the money should be used to fund affordable housing, eviction defense, public transit, and anti-speculation initiatives.

When over a hundred media outlets blasted the story, it forced SF city officials to issue statements. Mayor Ed Lee addressed the controversy by toeing the line, “People, stop blaming tech, … tech companies. They want to work on a solution. I think it's unfortunate that some voices want to pit one economic sector they view as successful against the rest of our challenges.”[1] Debates on the housing crisis and who was to blame were ignited all over social media and article comment sections. This media frenzy drew journalists from all over the world, highlighting the many communities resisting Big Tech and its contributions to rising rents and evictions. Multiple tech shuttle blockades followed with members of groups like Eviction Free San Francisco, Senior and Disability Action, Our Mission No Eviction, the Last 3 Percent, Gay Shame, and even random passersby joining in the action. The tactic also spread to Oakland, Seattle, and San Jose, cities experiencing similar problems from tech gentrification.

In February 2014, investigative journalist Tim Redmond uncovered emails showing that SFMTA had given Google and other shuttle companies a “handshake” pass for years, which verified the “two-tier system.” The emails also showed SFMTA had started giving Google more tickets after our actions, and that Google had hired a the highly influential public affairs firm Barbary Coast Consulting to try and dismiss the few tickets they had received.[2]

Tech and big business advocates’ response was to regurgitate the mantra that private shuttles take cars off the road and are, thus, environmentally friendly.[3] This greenwashing strategy ignored big tech’s history of lobbying Silicon Valley politicians to build giant corporate campuses for high-waged tech workers with no housing plan. The regional governments’ effectively exported their housing problem to SF, Oakland and beyond, while the industry and its representatives refused to account for all the displaced lower-waged workers now driving hours to their jobs in San Francisco.

After three months and multiple blockades on both sides of the Bay, the press finally ‘got’ activists’ anti-displacement message, and public opinion started to turn a critical eye on big tech extracting more from the community than it returns. Thus, the Heart of the City collective had more liberty to boost our level of theatrics and layers of parody. Our April Fools Day action purposefully preceded the appeal of the SFMTA’s Commuter Shuttle Program at the Board of Supervisors meeting. Here we launched Gmuni, a faux Google pilot program that would allow the public free access to ride the private shuttles illegally utilizing our public bus stops. Our program ‘representatives’ handed out Gmuni passes, and acrobats dressed in Google-colored spandex effectively blocked the bus as participants tried to board at 24th and Valencia Street. Performance artist Annie Danger confused the cops with her impeccable and hilarious rendition of a Gmuni CEO, while our stilt-walking Google/DARPA surveillance robot loomed over the crowd. Once again, we captured the media’s attention, though this time adding a little levity to a dire situation.[4]

Those pushing the April 1st appeal of the Commuter Shuttle Program lost the Board of Supervisors vote but decided to take it to court. Evidently, SFMTA approved the new pilot program without subjecting it to environmental review, which should be required under the California Environmental Quality Act (CEQA). Even adding bike lanes has been subject to such reviews in the past. According to the written appeal:

… there is no CEQA exemption that can reasonably apply to the Commuter Shuttle Project, because there is a fair argument that the Project will result in significant environmental impacts, including air pollution, the displacement of people and housing, and the displacement of low income communities and communities of color that live, work, and commute in the areas proposed for Commuter Shuttle activities. CEQA requires the lead agency to determine whether the “environmental effects of a project will cause substantial adverse effects on human beings, either directly or indirectly, … [5]

Unfortunately, housing, disability, and environmental advocates eventually lost the appeal. Successes may not come in the form of policy change from our broken ‘representative democracy’ but instead in the form of a growing social movement demanding justice and accountability, especially from the wealthiest corporations in the world that present themselves as environmentally friendly, innovative, even democratic.

Using the momentum of the media’s fascination with these actions, tenant rights organizers were able to divert their attention to folks facing eviction and finally get journalists to tell unglamorous but essential stories of the dispossessed. The actions penetrated mainstream media, ignited debates, and forced people of different backgrounds to have conversations around income inequality and privilege. UC Berkeley New Media and Performance Studies professor Abigail De Kosnik reflected, “It was as if activists had thrown a ball against the invisible force field of neoliberal global capital to see its contours and exploit the underbelly of its narrative.”[6] Though the fight is far from over, the ‘Google bus’ blockades played a pivotal role in highlighting the tech industry’s impact on displacement and fueled a larger movement fighting for a right to their homes, neighborhoods, and the city[7].

[7] ‘Right to the city’ was an idea proposed by Henri Lefebvre (Le Droit à la ville, 1968), further explored by David Harvey (‘Right to the City, 2008), and adopted by housing justice activists and social movements to demand their right to access and shape urban centers, along with the ways in which they live, work and survive within them.


This essay is an excerpt written January 26, 2019 summarizing a longer history of the Heart of the City collective and resistance to tech gentrification from 2013-2015, written May 8, 2014.