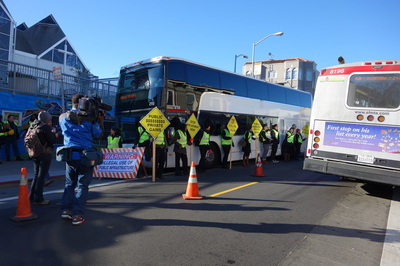 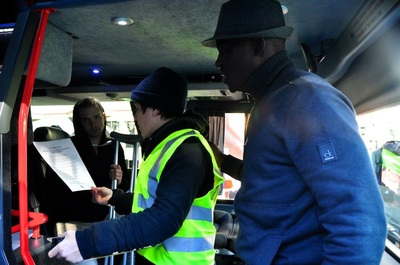 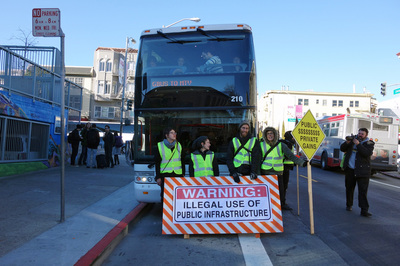 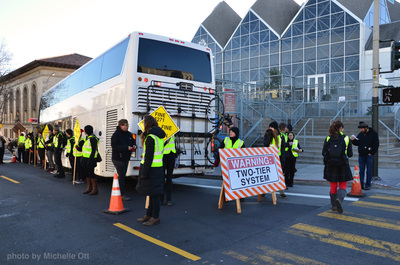 Today we we boarded and blocked a double-decker Google bus at Valencia and 24th St. in SF and issued a new (imaginary) ordinance detailing how the tech industry should start paying for its impact on gentrification and displacement happening in the area. [see below]

Over a hundred media outlets blasted the story forcing the city of SF and Google to issue statements. Supervisor Eric Mar then called for budget analysis report and hearing on these shuttles' impact on the city. The shuttles are symbols of deeper problems: a gaping wealth divide, worsening housing crisis and rampant displacement. Hopefully they take up these issues during the hearing. Debates abound, people are talkin'. The eviction and affordability crisis in SF are at center stage. Multiple groups are staging regular protests several days a week at this point. Fight the good fight with Eviction Free San Francisco and others!

Today we are the San Francisco Displacement and Neighborhood Impact Agency, and we're stopping the injustice in the city's two-tier system where the public pays and the private corporations gain.

Rents and evictions are on the rise. Tech-fueled real estate speculation is the culprit. We say: Enough is Enough! The local government, especially Mayor Lee, has given tech the keys to shape the city to their fancy without the public having any say in it. We say, lets take them back!

Tech Industry private shuttles use over 200 SF MUNI stops approximately 7,100 times in total each day (M-F) without permission or contributing funds to support this public infrastructure. No vehicles other than MUNI are allowed to use these stops. If the tech industry was fined for each illegal use for the past 2 years, they would owe an estimated $1 billion to the city.

We demand they PAY UP or GET OUT!

With $1 billion and counting we can fund:
Affordable Housing Initiatives
Eviction Defense
Public transit service improvements
Legislation initiatives to prevent speculators from using the Ellis Act & Costa Hawkins to evict residents
... and so much more!

We want a San Francisco where people can afford to live.

The city needs to declare a state of emergency, stop all no-fault evictions, and prevent tech companies from running  buses in residential neighborhoods, which is driving up rents (up to 20% along their route). #STOPSFEVICTIONS